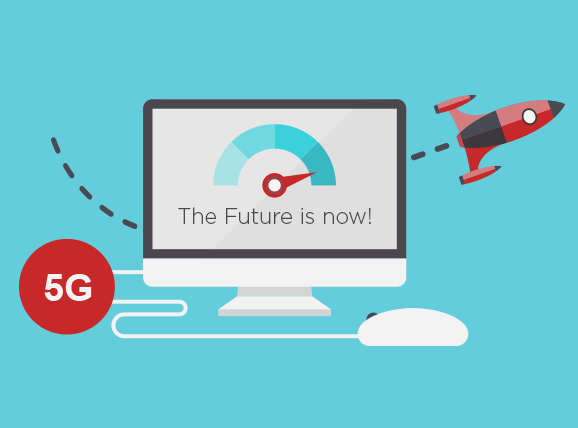 The continuing robust growth of mobile internet use is driving research and development of faster connection speeds. Researchers have recently broken all previous speed records, offering the potential for super-fast 5G devices that could achieve a wireless data connection speed comparable to that of a fibre-optic cable.

Research carried out at 5GIC, the 5G Innovation Centre at the University of Surrey, has led to wireless speeds of 1Tbps (terabit per second) being achieved. This speed is around 65,000 times quicker than 4G and smashes the previous record of 7.5 gigabits per second held by Samsung.

Running at 1Tbps, it would be possible to download the equivalent data of 100 full-length feature films in only three seconds, representing near-instant data transmission and completely changing the way in which we use the internet. Professor Rahim Tafazolli, the Director of 5GIC, believes that 5G will support the evolution of the ‘Internet of Things’, allowing devices to communicate inde­pen­dently and run future technology including holographic projections. “An important aspect of 5G is how it will support applications in the future," the professor said, also noting that it isn’t known “what applications will be in use by 2020, or 2030 or 2040 for that matter, but we know they will be highly sensitive to latency."

Brick technology have been developing mobile friendly websites since the technology first became available, with the 1Mbps (megabits per second) 3G making internet access possible from a mobile device. The arrival of 4G, with speeds of around 6Mbs, allowed the creation of modern mobile websites capable of streaming audio and video directly. We now look forward to the introduction of 5G, which is predicted to be running by 2020 in the UK.

The mobile web is extending quicker than ever before and keeping your online presence visible, contemporary and dynamic is essential. A fast, smooth-running website that delivers optimal performance on any device MUST be provided to your customers and working with a smart, experienced digital agency like Brick technology is key to your success.

Find out more about our unique mobile web design by calling us today. Brick technology Web Design Lancashire - for a faster future.